Discovering an artist for the first time, discovering their living space, their studio, their habits, is like discovering a new region that you have never had the chance to explore on your own. You might know it through images and narratives set in your imagination, but you never really know a place until you have set a foot on its ground and breathed its atmosphere. When Mitro invited me to come and meet him in person in his studio located in the countryside surrounding Giverny, I thought of the road which goes from Paris and beyond Mantes, at the boundaries of Île-de-France and beautiful Normandy. One of my ancestors came from here and mentioning this part of France has, as far as I can remember, always awaken a strange feeling of distance mixed with integration. This road – and the railway that goes along with it – has been famous for taking Parisians to coast of Normandy’s balneal towns since the Second Empire and is a departure route, a travel route, a route of retreat for the hyperactive Parisian society. Taking it is almost like entering a different era and a different landscape. This is not because of the simple breach between the city and the countryside, which does not make much sense in today’s connected world; it has more to do with the fact that going down the Seine’s flow to the ocean is like strolling to the unchanging vastness in which everything recognizes its origin and finality. This road is coveted by the Parisian bourgeoisie, who takes it to leave the city on the weekend. After 150 years of use, it has been raised to the status of a supreme consumer good, a flag of social success when it brings you the most precious thing megapolitans from all over the world are looking for: the time to do nothing. I have not known this time, the time when aristocrats could think of their existence in the peaceful flow of stones and unearned income, nor have I known the splendour of the pre-WW1 Parisian bourgeoisie’s affluence. What I know on the other hand is the life stories of artists who revolutionised global art 150 years ago, the story of the Vexin forest, the story of Giverny and the Seine’s bed. I know the Normandy portrayed in novels, the Normandy of Marcel Proust who, retired from the mundane life, well away from Paris, wrote his masterpiece after deciding he had lived enough, and that writing was all he had left to do. The story of our great Poet, of the unrivalled demiurge from the 19th century, who was the only one able to resuscitate Dante with his divine inspiration. Going into exile from Paris is an act of uprooting, but the golden perspective that opens before your eyes during summer nights on this Normande road let the supremacy of reality and fertility enter your heart, erasing the bastardised urban realities which are as sterile as the asphalt. After forgetting this feeling for a long time, I felt the wish to travel as I was standing under the Saint-Lazare train station’s glass roof, the incongruity of which surprised me, because my destination was only an hour away from Paris. For some reasons, I sensed that my brief stay at my host’s place was, for once, worth the journey. I sat on the train and was surprised to see I was more willing to listen to the surrounding chats than working on some project. Around me, business schools’ students were talking eruditely on town and country planning, before switching to French cultural policies. They eventually talked about art. They did not know much about it because of the naivety of their age, but a rather silent student had the final word: “Modern art deconstructs beauty. It has produced ugliness. But if we deconstruct ugliness now, will we have beauty again? If so, will it be the same beauty as before or a new one?”. I had to step out of the train and leave them go on with their chat, before they reached the flats they shared in Rouen. I wished this student all the best she deserved. In front of the Vernon train station, behind the little white train used to show tourists Giverny and its surroundings around, Mitro picked me up with his car. We took a country road surrounded by trees for almost 20 minutes before arriving to his place, a house located in the middle of the countryside full of the secure feeling that the eternal evokes. I was surprised by the modern style of his house: my host made the plans himself and seemed to have paid attention to every architectural and practical aspect of it. Indeed, I was soon to discover the main function of this house with flawless lines and volumes. Inside, nothing was left to chance. Everything showed an attention to detail, from the day-to-day life ergonomics to the aesthetics of a surprisingly balanced decoration in its committed stances: the house was not empty nor full, it seemed completely designed to welcome and fulfil the human, not only its owner or some ideal and fantasised guest that you could find in decoration magazines, the human in its universal dimension, open and undetermined. The house master, elegant without being precious, sober without being asepticised, gave the impression of the sense of proportion and that things were at the right place. The right element at the right place, a choice that left the

superfluous out of the equation, in order to choose just the essential… so many qualities claimed by artists I had met during my various projects which had rarely appeared so obvious at first sight.

Now it is time to watch the artist work. This friendly house master seems to be able to put up with a lot of visits and interruptions without showing any sign of impatience. However, this does not apply to his urge to work, which I feel is boiling inside him. I know he will not say anything about it, but his time is precious because it belongs to creation.

We take our places in his studio. This room, which overlooks the garden, suggests the aspect of a cube and reminds me of a jewel box, the cover of which is much bigger than the base. On the ground, the regular white tiles increase the feeling of finding oneself on a thread, the measure of which would have been materialised in a physical way, just as the millimetric tracing paper on our education. We briefly talked with his wife and one of his daughters while drinking a cup of coffee. When they left, I watched them through the glass wall that separates us from the living room. I now understand the profound nature of this place: it is a family house, not in the sense of a house aiming at accommodating a family, but in the sense of a space which only exists through the presence of its members. Without them, this place would not only lose its soul, but also any function. The layout of the rooms summarises the familial links preceding it. The studio looks like its direct follow-up and not the impregnable bunker claimed by so many artists. Open still seems to be the adjective that defines Mitro’s main nature, as a painter and as a man.

Mitro was born in Romania in 1957. He studied at Bucharest National University of Arts. He finished head of the class. It might be a detail, an old memory of student success as we all like to keep with the nostalgia of youth but I was soon to realise that the Mitro I met this day, established with his international fame, would be the same thorough and meticulous man he was during his formative years. He had a complete artistic education, like Eastern Europe’s prestigious universities could give at the time: graphic arts in the largest sense, painting, sculpting, demanding techniques of heritage refurbishment. Mitro quickly became famous in his country, which he left in 1990 to establish himself in France, the starting point of his true international career. Within a few years, he would become one of the leading lights of Modern Figuration.

In the surreal white quietness of his studio, a first question came to my mind, as irrepressible as the curiosity that seized me in front of his works: what is the base of this endless task of making beautiful things, of realising an idea, a vision in the material way? This before questioning oneself on the choice of painting per se, from a fundamental perspective, freed from any contingence regarding existence. 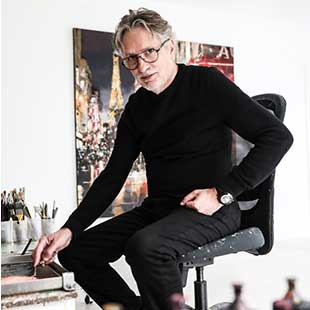